The team was hosted by the Commissioner General of Prison, Can. Dr. Johnson Byabashaija in the headquarters boardroom where a meeting with the Prisons Top Management was held in which the performance review and strategic objectives were discussed.

The Minister emphasized on enhanced prisons production to improve staff welfare as well as improvement of staff spouses’ livelihood, infrastructural development, capacity building and skills development among others.

The Commissioner general briefed the Minister on the Covid -19 situation in prisons and the measures the service has put in place to curb the disease among the prisons community. 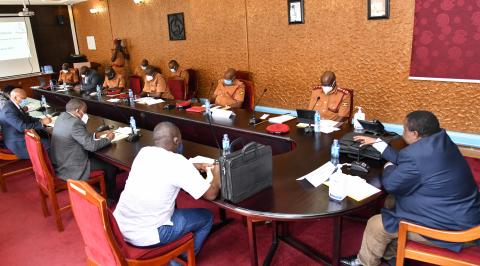